The lumber shortage that began making news for 2 x 4’s and other framing material has hit the hardwood industry. Hardwood lumber pricing has risen since September and is accelerating at a sprinter’s speed since January 1, 2021.

First things first, it’s important to note that this article pertains to the hardwood lumber industry.  Even though the press lumps all lumber together, the lumber shortage in the softwood industry is separate and beyond our knowledge base.  To better understand the difference between hardwood and softwood, check our blog, Hardwoods vs. Softwoods:  What’s the Difference.

This story begins before supply chain disruptions started to appear due to the COVID pandemic.  In 1999, the hardwood industry produced over 12 billion board feet of lumber, but things changed.  China had been working for 20 years to industrialize its economy and provide jobs for citizens, and it was working.

An industry evolving in China was furniture.  China could utilize its low-cost labor structure to make furniture and export the goods to other countries at deeply discounted prices.

Consequently, as furniture companies in the U.S. started off-shoring or closing, hardwood mills that relied on them closed too.  The fall of domestic furniture plants from 1999 until 2003 led to U.S. hardwood production falling from 12 billion board feet of lumber to 11 billion board feet.

However, the strong housing market that started in 1991 was one thing that kept hardwood mills operating.  According to the Federal Reserve Bank of St, Louis Economic Data, housing starts climbed from 921,000 units in March of 1991 to an all-time high of 2,273,000 in January of 2006.

Because of this drop in housing, the hardwood lumber industry decreased from 11 billion board feet of production in 2005 to just under 6 billion board feet in 2009.  Hardwood sawmills rely on millwork, cabinet, flooring, and furniture manufacturing to purchase their production.  Without new construction, there is no one to buy these products.

Hardwood producers had to either work part-time or close entirely during the time it took the housing market to bottom out and slowly rebound.  Those that closed didn’t re-open.  Hardwood sawmills that closed during the housing/subprime mortgage crisis have been dismantled and scrapped to this day.

Lumber mills that survived were severely cash strapped and could not invest in mills that closed.  Even if operating mills had minimal cash reserves, mills couldn’t afford to produce more inventory that wouldn’t sell. 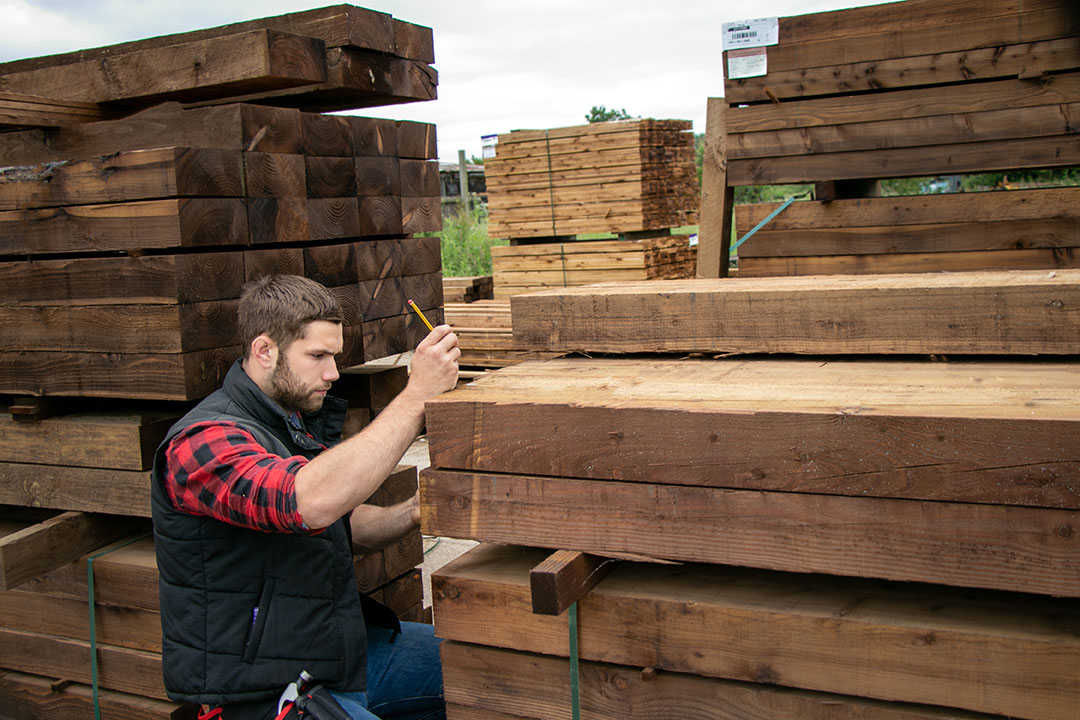 As the housing crisis subsided, hardwood sawmills found new markets overseas. Most of these markets were in China that demanded American species such as red oak, walnut, ash, and basswood.

Chinese industrialization was creating a new consumer.  Citizens of that nation had been working factory jobs and pursuing enterprising opportunities to accumulate wealth.  This prosperity offered them the opportunity to buy housing and furnish them with cabinets, flooring, and furniture.  China became the new market for U.S. hardwood lumber by 2010.  This new market merged with a slowly recovering domestic housing market.  The combination of market activities was enough to allow sawmills to recover lost production from the housing crisis.  Mills slowly reached total capacity again.

But China’s impact on hardwood mill production reared its head again.  In 2018, the U.S. government declared it would begin to assess tariffs on products entering U.S. customs and ports.  In an article written by The Guardian, it is stated the trade deficit became so great between the two countries, tensions crested, and the trade war began.   Included in the trade war was hardwood lumber purchased by Chinese manufacturing companies.  In July 2018, China’s government announced a tariff on hardwood logs and lumber from the U.S. up to 25%.

This announcement left China’s purchasing agents no choice but to curtail buying U.S. hardwoods.  If they chose to buy from U.S. producers, they were able to negotiate lower prices to offset the established tariff hikes. Many mills accepted the lower prices because they had gotten used to the previous level of demand and had production levels ready to meet it.

Again, U.S. hardwood companies had ample inventory for sale and a smaller export market share.  Like the bursting of the housing bubble, mills either had to curtail production or experience bulging inventory in their warehouses.

Just as abruptly as the trade war began in 2018, in February of 2020, news broke that China was lifting tariffs on hardwood lumber and logs imported from the U.S.  This was great news to lumber producers as they hit the bottom of cash available to them.  News of COVID-19 started to come to light, but mills were sure this “flu” would pass over quickly and they would soon have markets available at pre-trade-war levels.

Two weeks later, the world went into prevention mode.  People were limited from work and producing less products for at least the second fiscal quarter of 2020.  Even as they were classified as an essential industry, hardwood producers were hit like everyone with problems.  Mills decreased production due to health concerns.  Many had to close temporarily due to employees contracting the virus or having to quarantine from exposure to the virus.  Many customers stopped purchasing lumber for a short time due to the global uncertainty and dealing with COVID in their business.

Finally, as people stayed home during the pandemic, domestic housing and remodeling strengthened.  During quarantines, homeowners decided to make their houses more livable.  A housing shortage is becoming more prominent as millennials are looking to have families and need a home for their growing family.  Additionally, the world is healing from shutdowns, and demand from purchasing agents overseas has increased, especially in China as its citizens become healthier post-COVID.

All of these factors have contributed to where we are at today.  There was an increasing lumber demand, then it crashed in 2006. It slowly worked its way back, and then once again crashed in 2018.  Demand for lumber products is sky high since the world has started to recover from COVID.  Since the lumber industry had to decrease production due to COVID, the supply for lumber products was less than before.  And from here, it’s just textbook supply and demand economics.  When the supply is high, but the demand is low, the cost for the product is low.  But when the supply is low and the demand is high, the price of the product is also high.  And this is exactly where we are at right now.  The supply is low due to decreased production and increased demand, which in turn means that the cost of the product will increase.

However, as markets have improved, most hardwood mills are scrambling to increase production to meet customer demand.  As of this writing, production has not improved, and a hardwood lumber shortage exists.  The deficit has increased the price per board foot of wholesale lumber by 50% on some hardwood species.

Most lumber mills state they are trying to increase production, but they cannot get enough qualified labor.  Some mills have closed production facilities to focus on staffing their most productive facilities, and no one is looking to buy the closed mills yet.  The most common phrase heard is, “Who can I get to work in it?”  Until production meets the demands of consumers, lumber prices will remain high.

This was a slightly different project made in the Fine Craftsman Lumber Workshop. We needed another desk top, so we decided to take on the task. Here was our process: Butcher Block Instead of starting from scratch, we started with one of our butcher blocks. We make...

Wood can be super finicky when it comes to storing it. As a natural product, it reacts to the environment around it. As a woodworker, it is helpful to understand how wood reacts to its environment. From there, you can manipulate it to do what you want. Wood storage is...

What to do with Scrap Lumber?

Lumber is expensive. That's why it is important to reduce waste and use as much of each board as possible. Often, at the end of a project, you may find yourself looking for ways to utilize scrap pieces.  But finding those projects that utilize scraps can be somewhat...

← Everything You Need to Know: Black Walnut Lumber What to do with Scrap Lumber? →